A nerd disclaimer of sorts…

I usually don't publicly post about the '50 books in 365 days' group I'm in, but the book was so interesting and locally important, that I decided to have it viewable to everyone… not that you may particularly care or be interested, it is just the themes of the book are of such personal interest to me.

This entry was posted in Uncategorized and tagged 50 book in 365.

Although this book, strangely enough, does not appear on my 100 classic novels list, 'Uncle Tom's Cabin' by Harriet

Beecher Stowe, has been referenced in media and history more than any other book I'm aware of, except the Bible of course.

As a white, Canadian woman in my mid 30's, I'd like to believe that I know more about slavery, abolition of such, the Civil War, the Underground Railroad, Emancipation, etc. then the average person of my genre. I was a history major in University (where did that get me?) and I took a special interest in that period in history.

Although quite disturbing, because it's true, I've found that time in history fascinating, and I feel a bit more rounded now that I've completed 'Uncle Tom's Cabin'. I realize that Harriet Beecher Stowe had never actually been on a plantation, or in a Southern state for that matter, and her stories were based on accounts from escaped slaves, one in particular that lived (and there is now a museum) about an hour away from me in Dresden, Ontario. Also of particular interest to me, is that the slaves escaped to Amherstburg Ontario, a town about 20 minutes away, which I love (my grandparents lived there and I worked there for 4 summers). My mom said that her and my dad used to go parking at the well known boat access area for the underground railroad. It's not one of those places marked with a plaque, but just something everyone knows… (I'm going to check that out next time I'm in that area…) It's funny to me that this seemingly unimportant area I live is so important historically. It makes me proud to be a Canadian…

It's interesting to note that this was the number one seller of the entire 19th century and number 2 in the 20th century, only behind the Bible.

I read it knowing that it was used as propaganda for the Abolitionist movement of that time, and occasionally I laughed out loud at some of the sterotypes of the African Americans and Christians alike.

It was a good story, and I truly wanted to reach into the novel and slowly drown one particular character, and I found myself bawling at times as well (what else is new?).

I will say that I HATE when the author uses phonetical spelling, especially with accents and slang thrown in. It is like reading another language.

I would recommend this book to anyone! I am definately going to read an anti-Tom book, and more local history about the underground movement!

In my nearby city of Windsor Ontario, directly south of Detroit Michigan, there is a powerful memorial statue near the river, with a fugitive slave looking back to the US, as her party proceeds into Canada…. please excuse this crappy picture, but I couldn't find another…

This is the best, you can feel their emotion! 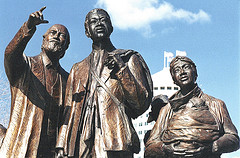 This entry was posted in Uncategorized and tagged 50 book in 365, harriet beecher stowe, uncle tom's cabin.

Devil’s Night and Other True Tales of Detroit

I was looking for a book about the Amish, and this one, strangely enough, was on the shelf next to where I was looking.

I live about 25 minutes south, (yes, south) of Detroit in Ontario. Since we are so close, pretty much all our media (except maybe Hockey Night in Canada…) comes from Detroit, and if we're looking to go shopping (especially now that our dollar is worth more) out to eat, or see a concert or sporting event, Detroit is the closest place to go.

Currently there is a HUGE scandal involving the mayor, which is just unbelievable, I'm tired of hearing about it. I'm tired of the people of Detroit being suckered by gansta mayors and related appointees. Detroit taxpayers paying for private vacations, cars for family members and high paying jobs that pay well but don't require anyone present to actually work…

I could go on and on about the pros and cons of living near such a big city with mixed view of it, but suffice to say that we benefit a lot from living so close to Detroit, without the negatives. Things have gotten better there in the last 15 years, but it still has a bad reputation, and y'know what? It deserves it for the most part, in my opinion.

I found this book to be interesting, the writing style was easy to read, and at times compelling. It was written in 1990, before the LA riots, and before the shooting death of Malice Green, who was the Rodney King of Detroit, (but he died, and the officers did go to jail…) Coleman Young who had a penchant for naming buildings and parks after himself (along with a paternity lawsuit against him when he was 71… good example there for the kids of Detroit…) was still mayor (Dennis Archer did a lot to clean up Young's mess…).

If you are at all interested in Detroit, it's a pretty easy read. If the past predicts the present, then this book helps one understand the economic, political, unemployment 'epidemic', drug, and foreclosure crisis that plague Detroit today.

This entry was posted in Uncategorized and tagged 50 book in 365, devil's night and other true tales of detroit, rant!, ze'ev chefets. 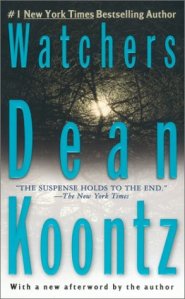 I finished reading, 'Watchers' by Dean Koontz. I do like Dean Koontz, although he is not my favorite author, (still waiting for the 3rd Frankenstein btw) he has written some pretty freaky fiction over the years.

My husband has been telling me to read this book for about 6 years now. I finally ordered it at the Library, and I'm so glad I did. This book was published in about 1987, and how I've missed it for all these years, I have no idea…

I'm a huge dog lover, (as is Koontz) and suffice to say the book is about a very intelligent dog, living the best life you can, and good versus evil. It was a nice, quick, easy, compelling, enjoyable break from the novels I have been reading.

This book was #12 for me, with lucky number 13 being The Handmaiden's Tale by Margaret Atwood… I also should mention that although I've read quite a few this year already, I a) do not work outside the house b) don't have any kids (save a furry fourlegged one) and c) pretty much won't crack a book from April to November, because once the weather is above 40*F, I'll be GOLFING!

This entry was posted in Uncategorized and tagged 50 book in 365, dean koontz, watchers.

This is my ninth book so far this year. I found this book to be an easy read and a page turner. It took me less than 2 days to complete it.

It was a great story, and a typical pick for Oprah's book club, (I see a pattern in the books chosen…). I sort of guessed the entire plot, and really only 1 sentence near the end surprised me. I'm not sure if it was intended to be written this way, but I was turning the pages quickly, curious to see if my assumptions were correct, which they were.

All in all, it was a great book, but I found the ending very abrupt and a little too tidy. I wonder if the author had an alternate ending… I'm going to check out some reviews and see if anyone else felt this way…

This entry was posted in Uncategorized and tagged 50 book in 365, christina schwarz, drowning ruth.

On Sunday night I finished read 'Dark Paradise' by Tami Hoag. I read this one pretty fast, not due to its compelling story, but because I was excited to start on the 'Lidie Newton' book.

This book, I'm sorry to say wasn't very good. It was okay at best. Her later writing is much better in my opinion.

Here is my synopsis:

Rude, harsh, cowboy has rapist-like thoughts about his new neighbor. The two hate each other passionately. They end up making out.

He talks tenderly to her, they fight, vowing to never engage again in the best sex they ever had.

The meet again, fight and end up having sex again.

Okay, there was more to the story than that, but it is so annoying to me, that now, I'll always remember this forgettable book. It is a mystery, a mild 'thriller', but honestly, even if you are a Tami Hoag fan, skip it. It's very predictable and cheesy.

This entry was posted in Uncategorized and tagged 50 book in 365, dark paradise, tami hoag.

I must preface this by noting that generally I don't read this many books in such as short period. It happens that my husband has been playing World of Warcraft more than usual, and I've been a bit sick with a cold, so therefore my time to read has been plentiful of late.

Sliver of Truth: A Novel

So, with that said, I'm sure that everyone will agree, that when you are reading a good book, (especially after reading a couple of not so great books) one tends to find extra time in the day to indulge themselves…

I just finished reading 'Sliver of Truth' by Lisa Unger. What I did not realize that is the second novel after 'Beautiful Lies'. By the time I realized this it was too late; I was hooked. How long did it take? 4 pages into it - I couldn't put it down.

It's not the best book I've ever read, but I certainly found it compelling. It is written in the first person which normally sends me around the bend, (I think that Kathy Reichs or Patricia Cornwell often writes in this format, I can't remember which one, and I'm too lazy to look it up…) and I can't stand it! In this book, I thought that the author does an amazing job of making her character realistic, (of course with great adventure…) and the style works really well.

I definitely recommend this book, but would seriously considering reading 'Beautiful Lies' first. I'm going to order it from the library tomorrow!

This entry was posted in Uncategorized and tagged 50 book in 365, lisa unger, sliver of truth.

Sometimes I wear an orange wig…